So I spent the previous weekend in Poznan, which was hosting the Poznan Game Arena fair. It was my first gaming fair ever so I didn't really know what to expect. I attended it as a visitor - so I was not showcasing my own game. It's way too early for that. Or so I thought - but more about this later. 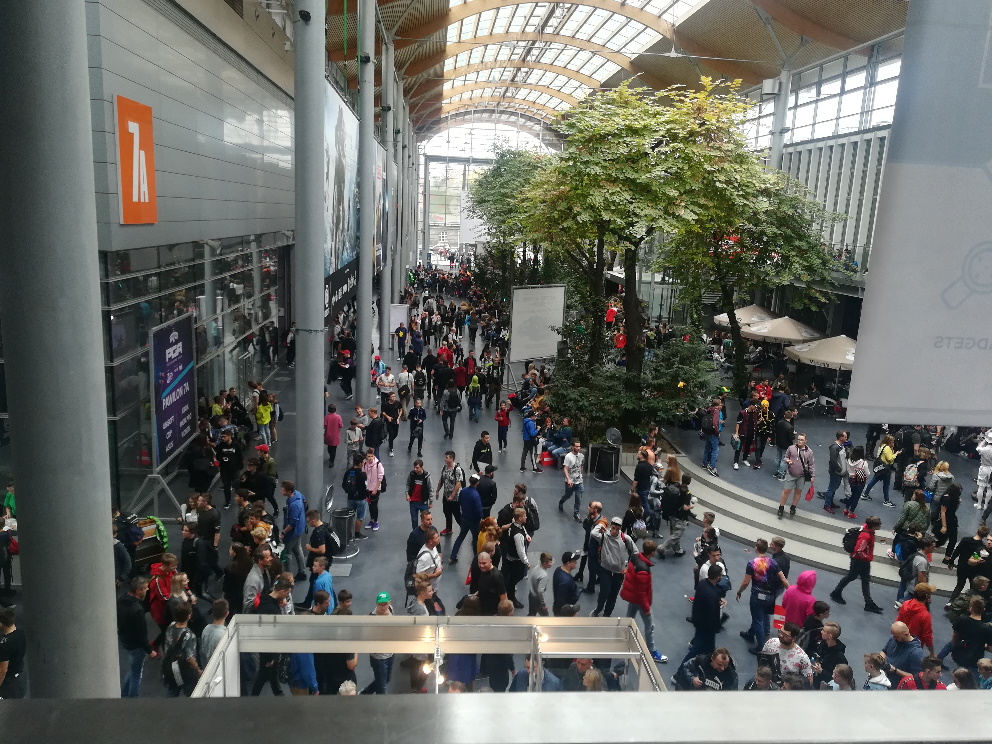 My main goal for visiting PGA was getting a general idea of what is going on during such events and see whether it makes sense to set up a booth of my own in the future. Here are some things that I learned, that might be useful for the others:

Be sure your stand/booth is standing out, and your game name is visible

Once I reached the hall where indie games were being presented, one thing struck me: most of the games that were a part of a bigger booth (like a booth owned by an indie fund) were barely visible. Each game had the same display (provided by the sponsor) and inputs (keyboard, mouse, etc.) and as they were packed very closely one to another there was no way of seeing what games are there anyway. The only clearly visible thing was the logo of the sponsor (LG company) who provided the hardware.

Also, there was barely any place for the game developers to stand next to the player.

Initially, I thought that in future gaming fairs I would not be having my own game booth, all branded and everything. Going as a member of a bigger group - especially if it's free - is very tempting, but I recommend doing some research on how the showcasing place will really look like. Otherwise, you might be stuck in a corner of a room, with no real way for the players to reach you.

11bit Studios had a great booth, with some neat wallpapers for Children of Morta. Having something like this would be a blast. 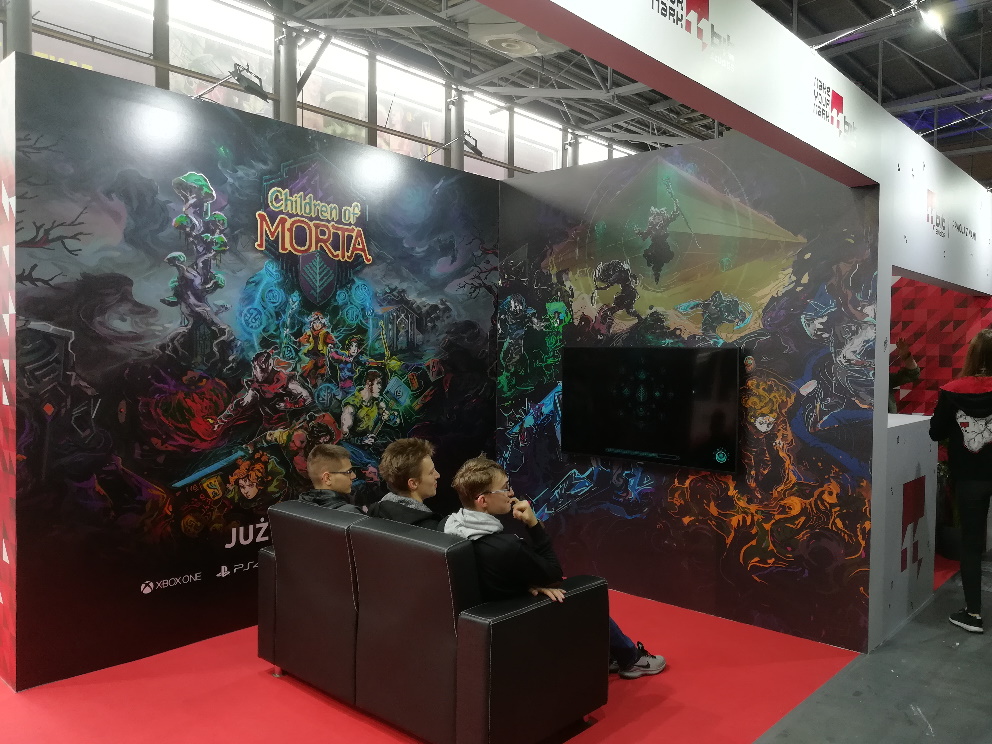 Make sure that you have a game to show

There's a saying that if you believe you can show your game to the public, it's already too late - as you should showcase and playtest it as early as possible. I get it - that's why I am releasing the tech demo of my game, even though the game is far from being ready.

On the other hand, I've seen indie games at PGA that were clearly not ready to be showcased at all. I won't be pointing fingers here but I believe these games were just taking space for better ones that could be present instead. "This is The End" is far more ready than these games were; now that I'm thinking of it I am pretty sure I could showcase my game at PGA with no shame.

...although I am not sure whether they make the people memorize your game better. Some of the booths (Riftbreaker, for instance) were having a giveaway of some random gadgets. You had to spin a wheel to win a prize. 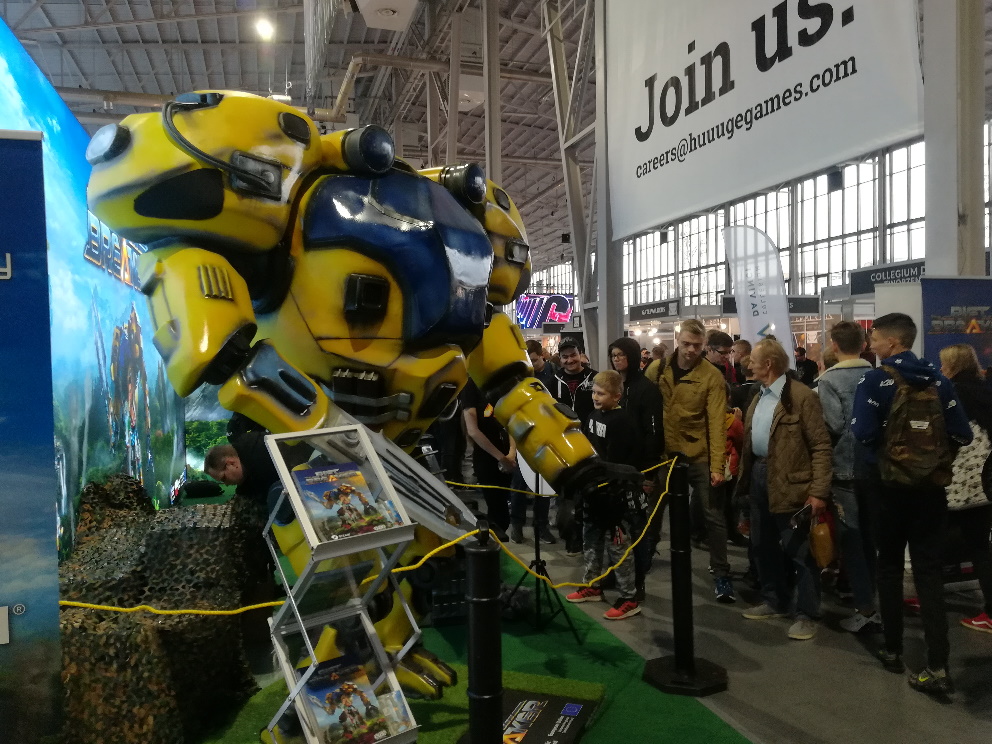 Well, they also had a cool robot statue.

This attracted a lot of people near their booth. However, it seems that people (children, mostly) were more interested in the prize than in the game itself.

I believe that it all boils down to what kind of competition you are hosting. A competition that involves playing your game (especially if it's a local coop game) sounds way nicer than a spinning wheel giveaway.

Listen to your players, gather feedback

As an indie developer who would be showcasing my own game, I'd have two major goals: make sure that people remember my game after they leave and make sure that I gather as much player feedback as possible. Both of these goals require social skills (you need to talk to the player to hear stuff about your game!). Some of the developers were clearly lacking them.

I heard that a good practice is to have a wall of sticky notes (or a whiteboard, maybe) which the players can use to provide feedback. This might be a good solution for the kinds of people who'd like to avoid human contact.

Boy, was it loud out there. Lots of people, lots of noise. If you didn't provide a good headset for your game there was no chance for the players to hear anything. So either you invest in some noise-canceling stuff or you turn the sound off completely.

Even AAA games did it wrong. I wanted to play Control as I heard that it has some nice telekinesis mechanics (basically giving the ability to throw stuff at people, which sounded cool). It turned out however that I couldn't reach the point in the game where the main character starts using these awesome abilities. I had to go through some introductory, story-based, cinematic-like experience first. So no combat for the first couple of minutes (and often you only have a couple of minutes to hook the player!). Also, due to no headsets being present there was no way to immerse yourself in the cinematic experience anyway.

As a visitor, take advantage of 'VIP days' if they're present

Well, this piece of advice is more for visitors. I attended the PGA on Saturday, and the number of people was staggering for me. This is how the booth for Cyberpunk 2077 looked like 15 minutes(!) after PGA gates became open: 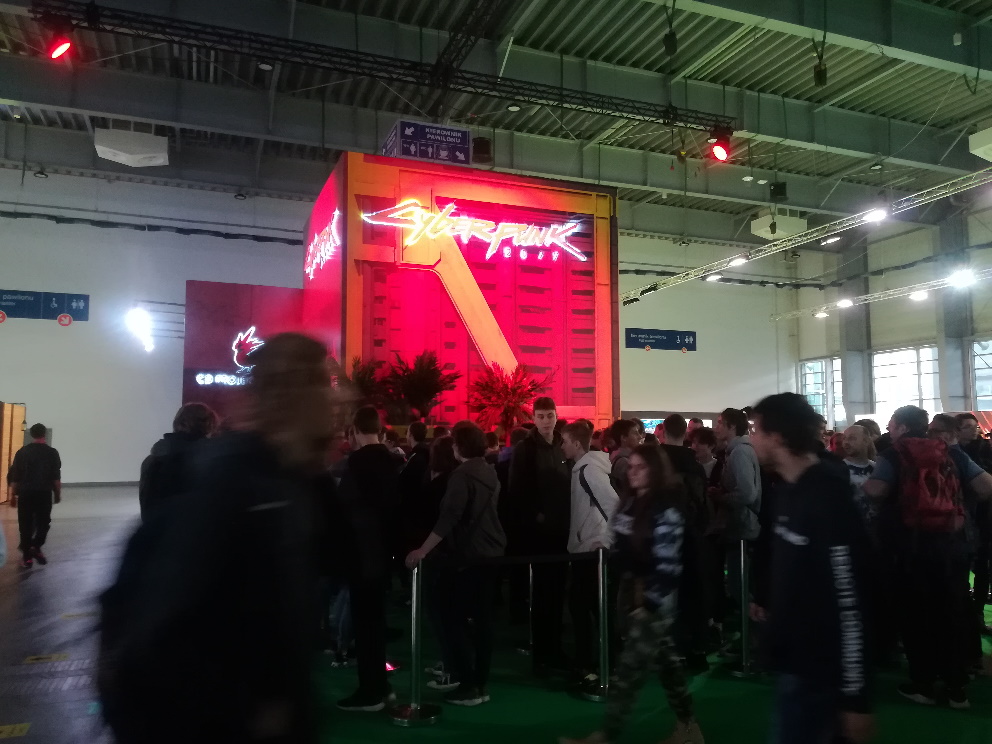 If you're planning to visit PGA - especially with children - consider visiting on Friday. The tickets are more expensive but (as I heard) it is less crowdy.

NOBODY knows about your game

We all know that, but I tend to forget about it. I was talking to several indie developers about other indie games in production that I follow. Some of these games were even having successful Kickstarter campaigns - which might mean they're recognizable. Guess what - nobody actually heard about any of the games that I know and follow.

Alright, so much for the PGA experience. I had lots of fun there, that's for sure!

Back to the game development thing: I have most of the stuff ready for the tech demo. Steam page is almost set up (although I will be hosting the demo on itch.io).

As I am waiting for the new game logo to be finished, I am setting up a list of media/contacts to reach out after the demo is out. Also, I am working on a short trailer as well.

Here's an important note: starting from now, I will be posting devlog updates once every two weeks. This will give me some more time for development (creating devlog entries takes a lot of time as well) - especially because there won't be that much stuff to show in upcoming months; I will be working on the strategy layer of the game (ship management, mission selection, etc. etc.) and it will take some time before I figure out how the UI for that part should look like.

Have a great day, everyone!