In theory, the submission deadline for Digital Dragons Indie Showcase competition ends in less than a month. The problem is that their submission page is not working (I contacted them about it several times, with zero response). I suspect that they might move it again. And for the time being, I am done with the combat phase. I need to complete the gameplay loop.

That being said, the demo planned for the competition will still hold the combat part only. Or at least that's the plan. It might be that if they push the submission deadline even further, I will be able to put the shelter phase into that demo.

Speaking of combat: characters are now reacting verbally when getting critically hit:

Luckily, Kurt has finished his (outstanding, as usual) job on creating shelter assets so I was able to start tweaking the visuals of that phase.

So, here's something more about shelters.

The goal of the existing demo (download and play it, if you haven't already!) was to reach the entrance to a bunker. Reaching a bunker (or we can call it a shelter, as it won't always be a bunker) is the end goal of each combat mission. The team travels from shelter to shelter until they escape the city (or face some end-game challenge; I haven't focused on that part of the game yet).

In order to unlock the bunker mechanism, a team member has to be equipped with a Fusion Core. Only by having this item characters are able to transition to the shelter phase.

Side note: I need to make sure that players are able to advance even if they don't have access to a Fusion Core. I have some ideas on how to handle it, but I will save them for future blog posts.

When characters reach the shelter the player has the ability to craft some extra equipment, cure wounds, reduce stress and so on. Shelters act as safe places that allow you to select the next location/mission to move to.

Here's the work-in-progress screenshot of the shelter view: 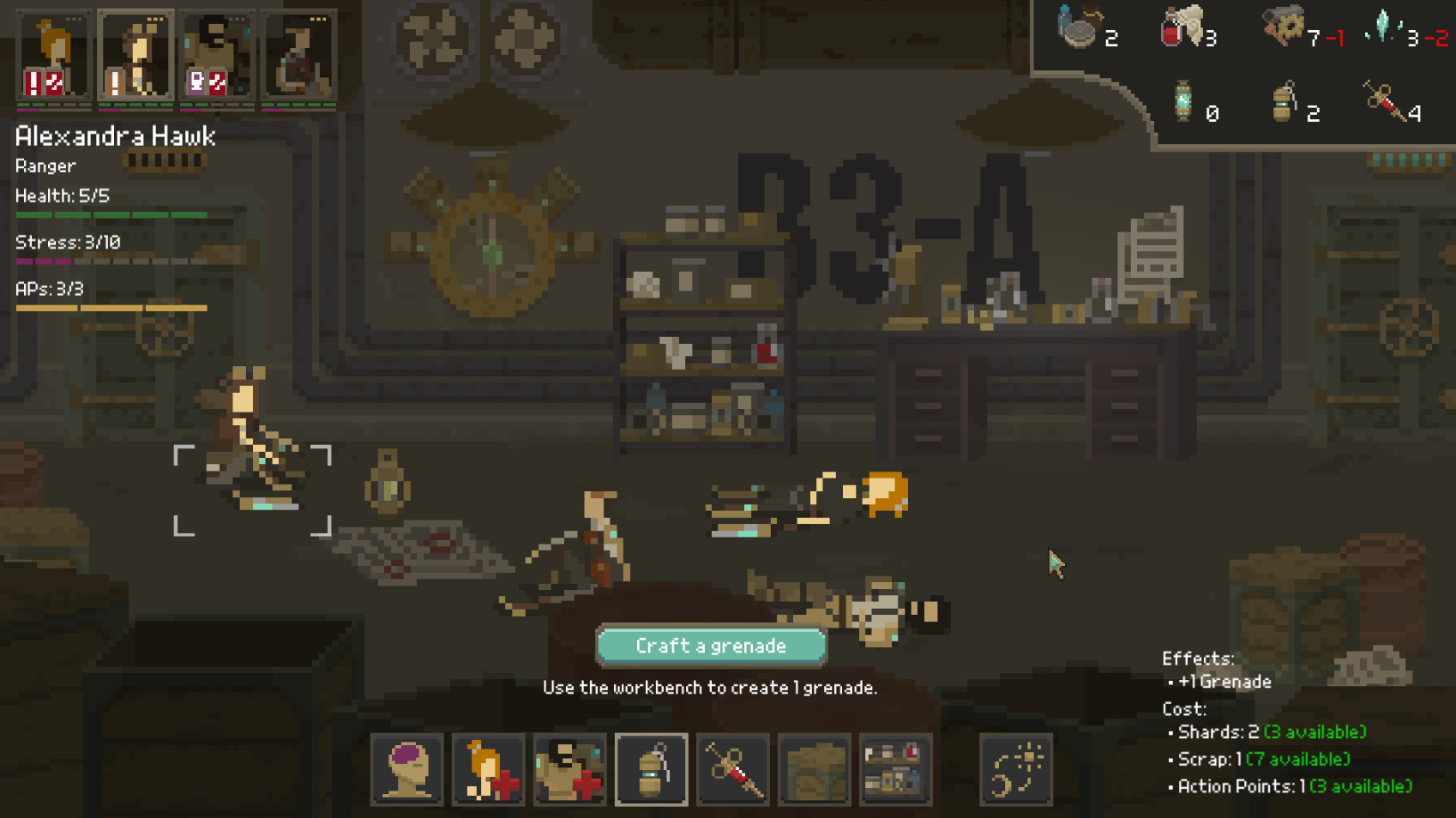 Each character can be visualized in two different ways in the shelter. If they are not severely wounded (meaning they have more than 2 HPs left), they are sitting near the map and can perform shelter actions.

However, if a character is severely wounded, they are unable to do anything productive. They simply need to rest. Or, they might simply die off if not treated correctly. Again, I believe the wounds mechanism needs a separate blog entry.

Every character gets a number of shelter action points they can spend on different actions. The number of action points depends on their health and stress levels. The actions' list is placed at the bottom (so same as in the combat phase).

Right now I am trying to tweak the user experience when using the shelter. The player can use the mouse to select an item/character and a corresponding action gets selected.

After I'll be happy with the shelter actions execution view, I will start adding the visuals for the food distribution phase; it might be that I will write more about it in the next devlog entry.

See you in two weeks!

Yeah, having a child-friendly mode might be customization option. What about other stuff, like blood or overall violence though?

Yeah being able to turn off blood would be great!

I don't know what other kinds of violence there would be to turn off, to a certain extent people getting shot and falling over are unavoidable in this kind of game

Oh yeah, there will be violence in Shardpunk, and there's nothing we can do about it :)