Devlog #111 What if there is no Fusion Core? - alternate version

Howdy! In one of the previous devlog entries I was figuring out how to deal with a situation in which the player somehow ran out of Fusion Cores.

For those of you that don't know what Fusion Cores are, and how they are used in Shardpunk, here's a brief introduction:

Fusion Cores are battery-like items that look like a jar with a bolt of lightning inside. They are powerful energy sources that can be used in a few different ways.

First of all, you can use them to power up and open entrances to further levels, which allows you to finish the combat phase and advance to the shelter phase:

Secondly, you can use them as lightning bolt throwers during combat. Good AOE, always hits, ignores cover:

After the automatons have been added to the game, Fusion Cores can now also be used to "revive" your broken mechanical buddy:

You can find Fusion Cores on your journey, scattered on the map, or as part of the loot from dead enemies:

Now, let's focus on the first ability - opening up entrances to shelters. It is obvious that a player can run out of Fusion Cores, so a scenario in which there was no means of opening up the shelter had to be handled.

Initially, I decided on allowing the player to pick an alternate escape route from combat - one that would still allow them to finish a mission but would punish them by not making the shelter phase available afterward. That worked pretty well, but as the game progressed, the punishment became too big - as the shelter phase has evolved so that the player can upgrade their weapons during it - and weapon upgrades are important.

So, sometime after I introduced automatons, I've decided that the player will always be able to unlock a shelter. If they don't have a Fusion Core to spare, they can use the automaton to do so. An automaton is a prototype unit, holding a unique and powerful energy source - and so it can force the shelter door mechanism into an overloaded state, which, in the end, opens them up. The only downside of such a Fusion Core-free approach is that it takes more time to open such doors - there's basically a number of turns that need to pass before the bunker opens. 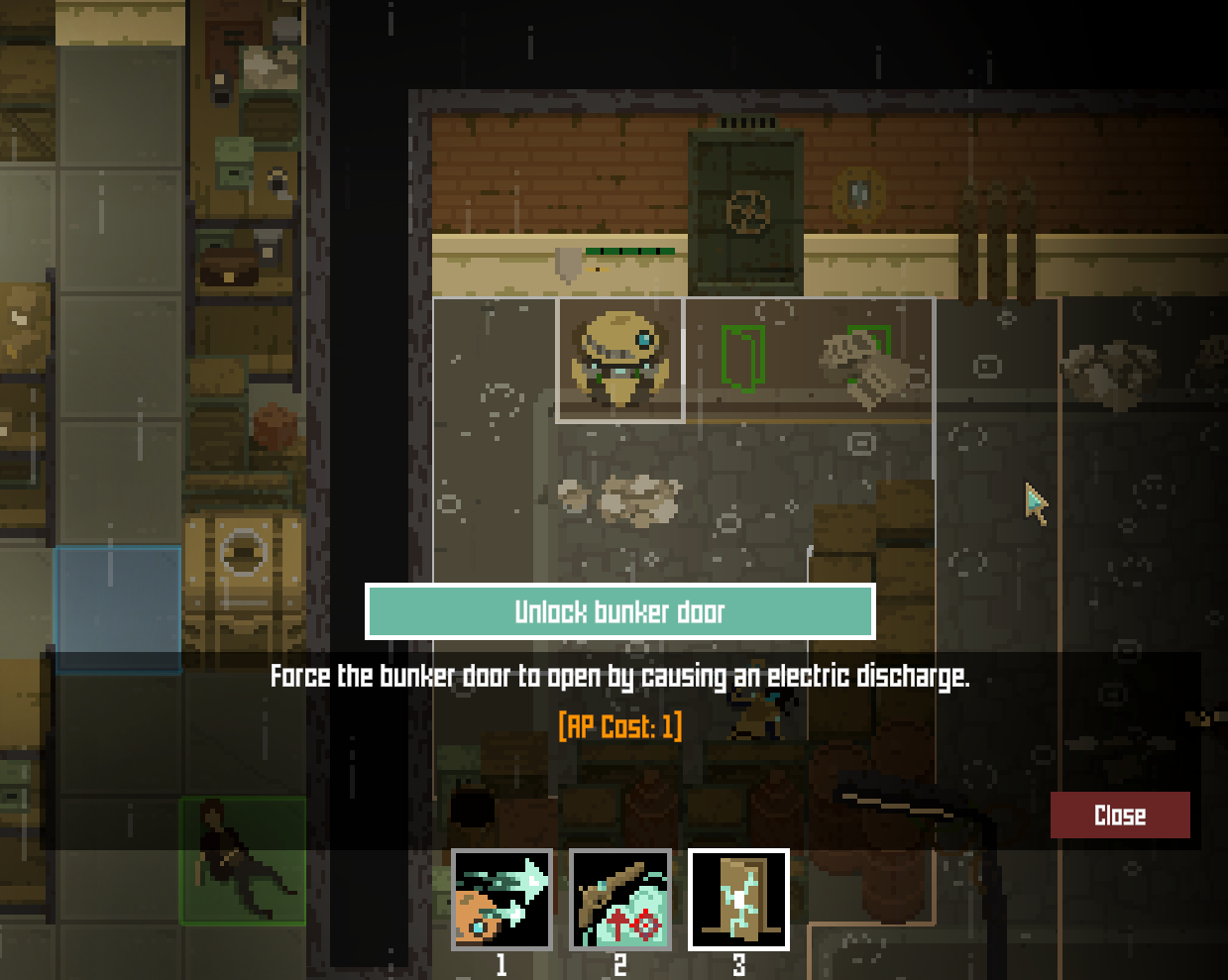 The support automaton is right about to electrify that entrance. But it won't do it now, as I don't have an animation ready for it yet.

This way of handling things - while maintaining a risk/reward approach - greatly simplified game rules when it comes to entering a shelter. I could assume that there will always be a "safe place resting" phase between missions. Which also allowed me to simplify parts of the UI.

Here's how the feeding phase UI looked like before this change:

It was basically pure UI, with no resting characters rendered in the background - and that was because I was using it also in scenarios when the player was not entering a shelter (which right now is not possible anymore). I could not simply state that in such situations the player would not have to consume food, as that would lead to an exploit - players would be intentionally skipping a shelter phase to avoid hunger damage/penalties.

In the new "shelter is always there" approach, I was able to embed the feeding UI into the shelter visuals. This is how it looks like right now.

I like these new mechanics - and the refreshed feeding phase UI - a lot. The idea that there is always a resting phase after tough combat is also comforting in a way. After all, we all like to have that "safe place" vibe from time to time, right?

Thanks for reading! Take care!