Hello again and welcome to another part of the summary of stuff that I managed to implement in the previous month!

Armor mechanics is pretty straightforward: aside from having regular hit points, each character can have armor points defined (displayed as an orange rectangle, alongside of hit points). Each armor point reduces the damage taken by one. The armor can be shredded using specific kinds of attacks.

Now, the key was to make sure that information about damage absorption and potential armor shredding would be clearly displayed to the user - so again, I re-used the approach from xcom: 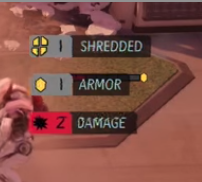 As you can see, each combat message has an icon and color associated with them. I decided to do something similar:

Here the enemy does not take any damage, due to high absorption.

In this  scenario the attack actually shredded 1 point of armor, thus allowing the enemy to take 1 HP of damage.

The combat messages are not limited to displaying damage or armor things - basically all important situations can be described by them:

The same combat messages mechanism has been used when displaying the overwatch reaction shots, which I will describe in the June summary tomorrow.