Hello everyone! So I am back from my holiday break, and here's some progress on the inventory/loot features that I am working on.

Each character will have the possibility to carry several items - basically the more items you can carry, the more item "slots" a person can have. Items of the same type will not stack in the same slot - each item will simply take one slot.

I'm switching the active character, and their inventories are displayed. Inventory items are using my temporary graphics, sorry...

Ammo clips will be used for well... reloading your weapon. Note that after you reload a weapon, its ammo is reset to maximum value, but the clip is lost, along with any ammo that was left in the weapon. This will encourage the players not to overuse the "Reload" action, as there will be no benefit for reloading the weapon if there is still any ammo in it.

I will write more about the rest of item types later on. For now, the most important thing is that the player will need to collect most of these items during combat - either from the fallen enemies or by searching for them in marked locations.

I thought about how to implement the UI for picking up/dropping items. Initially I thought about using the approach from classic UFO: Enemy Unknown, or the way that Phoenix Point has it implemented:: 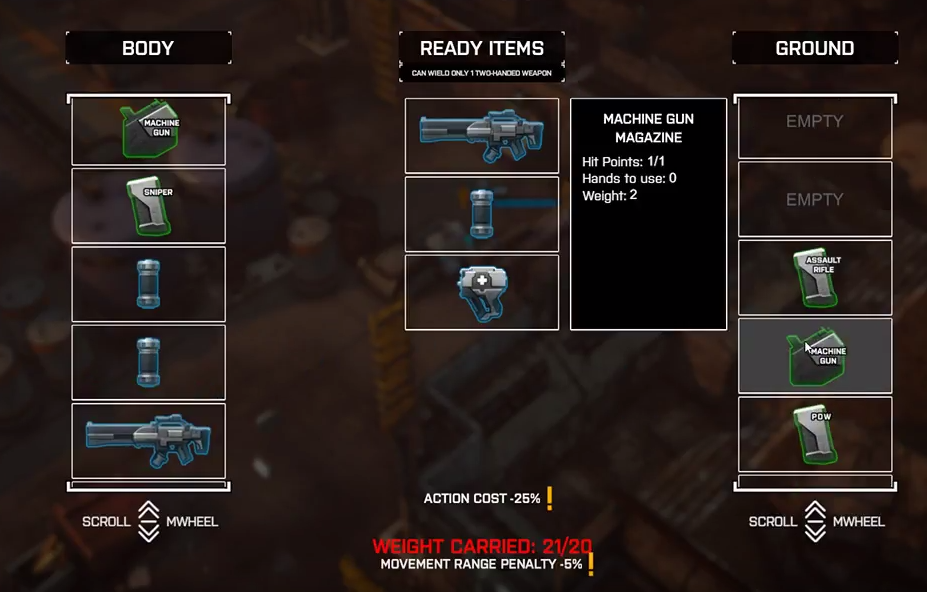 The problem with these approaches is that each time the player wants to pick up/drop the stuff, they need to open a modal screen, and spend time there shuffling stuff around.

I don't want such experience to be present in the game. The player should be able to quickly pick up the stuff from the ground and then, if it turns out that they are carrying too much, to quickly drop excessive items.

Therefore, loot pickup mechanism works as follows:
• Character stands on a tile with loot,
• Player executes the "pick up loot" action (such action does not cost an Action Point),
• All items present on the ground are picked up and added to character's inventory; player can immediately see them there,
• If it turns out that character is carrying too much, the excessive items would be displayed in red,
• Player can click on any item to drop it.

Below you can see a character carrying seven items, although inventory capacity is four: 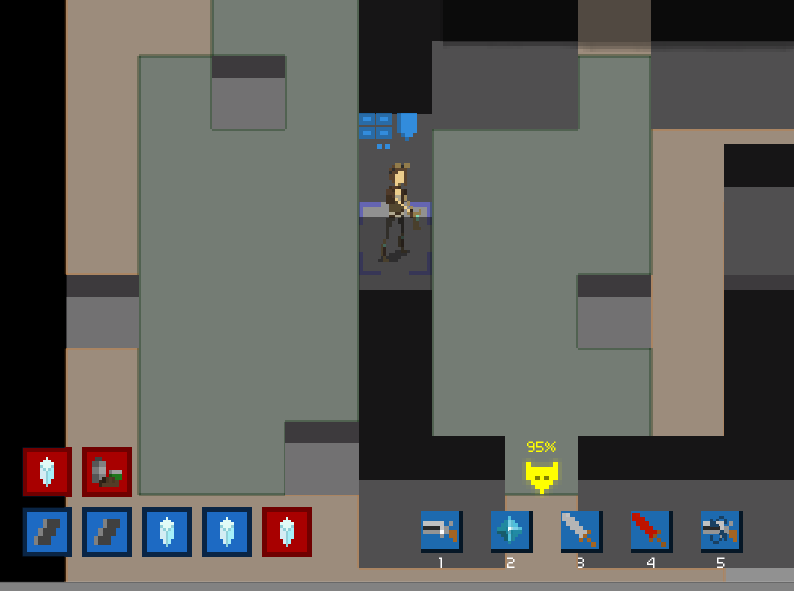 Oh, and when a character is overburdened, they cannot move nor execute any other actions.

I do need to consider whether it would make sense to implement items' throwing mechanism into the game. After all, it would be interesting if a character could throw an ammo clip to another one. Question is whether that would be fun. We'll see.

That's it for now. Still a lot of work is to be done on the loot/inventory system, so expect that next week update will still be about covering the remaining stuff. I just need to get myself up to speed after the holiday