This update will focus more on game design thing. I won't be showing any new fancy gifs or images. Well, I will try to squeeze a graphic or two, but only for the game design sake.

This entry will be about weapon ammo feature. In my game one of the core concepts (similar to XCOM) will be cover and flanking mechanism. Enemy who has been flanked, or whom cover has been destroyed will be more likely to become hit by a ranged attack.

The other core feature of the game will be collecting stuff during the missions. In order to survive, player needs to find supplies to keep the characters alive. One of these supply types were ammo clips.

Character could take a number of ammo clips on a mission, or he/she could find them on the battlefield. If the character was out of ammo, they could not fire the weapon anymore.

That concept initially seemed OK for me. I do wanted the player to feel pressure due to lack of resources; and what is better than the need to count every bullet and ammo clip?

Well, during playtesting it turned out that this approach is not fun at all. When a character was out of ammo clips, they basically were losing the ability to perform the attack. Sure, the rogue character has a sword slash ability - but it won't be available at initial character experience level.

So the combat was not fun at all if a character was not having any ammo. The whole flanking/cover mechanism was not making sense. 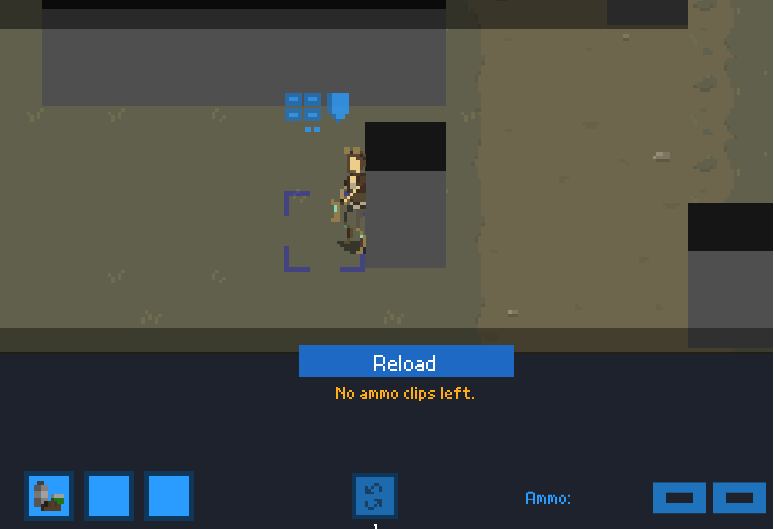 No ammo in the clip, no clips remaining - character has literally nothing to do.

Initially I believed that if I allow the characters to throw ammo clips between them, I could partially solve the problem - if one of them would be out of ammo, the other one could throw them a clip.

That still did not solve the problem though. First of all, forcing the player to use the "throw" action was clunky at most. When you are thinking about how to position your characters, you really do not want to remember that they do need to stay in the throw range, in order to catch the ammo.

Secondly, even with throwin mechanism, the team could still run out of ammo.

And thirdly: if the ammo clips would be such a critical resource, the players would heavily favor Rogue characters due to the melee slash attack that I mentioned about - as it does not require any ammo.

Solution 2: adding melee attack for everyone

If each of character types would have a melee attack, the player could make use of them even if they run out of ammo. That could potentially solve the problem, but then what would be the point of using ranged weapons at all?
I could make these melee attacks weak (to make sure that the player would not exploit them). However, what's the point in having these underpowered attacks available? I mean if you have only one use of a feature in a game, it does not make sense anyway.

Well, that would work. XCOM works like this. Each character has an unlimited number of ammo clips. They still need to reload, but they never run out of the ammo.

However, sticking with this idea would make my game too XCOM-ish. Also, remember I want the players to feel that they are running out of resources. And how could then run out of ammo clips, if there would an unlimited number of them?

I want the players to not worry about running out of ammo during a mission. However, I do want them to spend resources on weapon maintenance. So I came up with the following idea (which I've tried to embed in the game theme as well):

Weapons do not use "real" ammo - they are more like energy/kinetic weapons. Each weapon has an energy core, that heats up after each shot. When the heat is at maximum, player needs to cool it, which is the equivalent of reloading.

Weapon heat vs ammo. Basically the same mechanic, but with very different possibilities!

So far so good. So I've only renamed "reloading" to "cooling" and effectively removed the need of having ammo clips.

Then the durability thing comes in - after each combat, the energy core gets worn. If it becomes too damaged, the weapon becomes useless and the player is not allowed to take the given character to a mission - as it will be impossible to send characters without weapons. Player will have to spend resources on fixing the core.

This makes sure that the player has to worry about weapon maintenance.

The idea seemed OK, but then I realized I can go deeper with this one - by introducing a very nice risk-reward system.

The thing is that even if the core is at its maximum heat (so the equivalent of no ammo being present in a weapon), the player does not have to cool (a.k.a reload) it. They can risk performing another shot, that:
- Will cause more damage (the core is hot so the projectiles are more deadly),
- Can cause a core malfunction, which will damage the weapon owner and effectively reduce core's max heat (meaning that the "clip size" will be reduced).

This risk/reward thing seemed so good that I decided to go that path.