No, not for my game - that's waaay to early to even consider that :) But - a fellow indie developer Jakub Hakiel has just started a Kickstarter campaign for his 2D top-down action rpg named Ada. Go check out his Twitter and the Kickstarter page!

Now, about the progress on "This is The End": as I mentioned, I went bughunting again. The fixes were mostly cosmetic, but I managed to remove quite a few annoying ones as well.

I must say I enjoy describing the code check-ins when working on a game in opposite to working on a business application (which is what I do for living for now). I mean business app check-in names are boring! Compare "Fixed a calculation issue for negative gross values" with "Attacker animation now does not freeze while waiting for the target to collapse dead". Now how cool is that?

While working on some fixes I have also altered the way in which the % to hit is displayed: instead of only showing it on the bottom part of the UI, it is now also displayed near the targeted character:

Oh, and when a survivor dies, the camera focuses on the corpse a little longer before moving on to another character. Game will be have permadeath, so I want the player to focus on the death moment a little more.

Anyways, I have managed to remove all the nasty bugs from the gameplay. And from now on I am enforcing a zero-bug policy - meaning that if I find one I will focus on fixing it right away instead of tossing it to the "will fix later" bag. These stabilization/bughunting milestones are simply too boring...

What's coming up next?

I have noticed that I am becoming too obsessed with tiny details of the game (like constantly tweaking the camera movement); my focus must be more about adding all the remaining features. So the next milestone is about altering the demo level and playing with lightning in the game.

Oh, and I am starting to feel that I need a game logo. Gonna have to think about that. 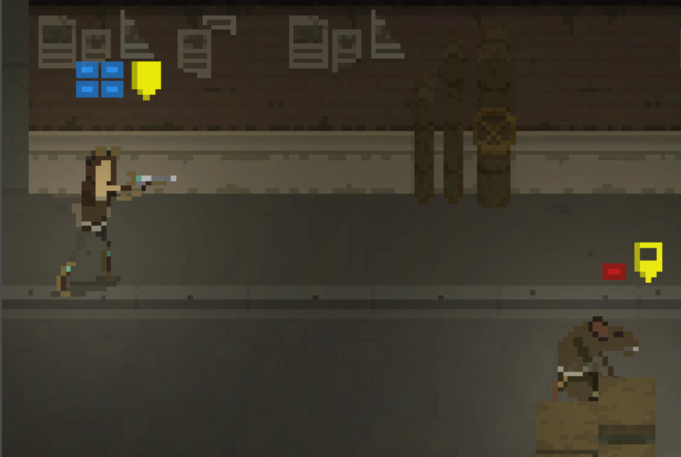