(first, a complaint: I got to say I am having an issue with Itch - I simply cannot find my devlog anywhere on https://itch.io/devlogs page, even in the "most recent" section. Already contacted Itch about it a week ago, but they didn't respond.)

That being said, let's get down to business, shall we?

I kinda enjoy spoon-feeding my readers with gifs and images on a weekly basis, so here's some more to share.

First of all - I was working on having a basic main menu of the game. 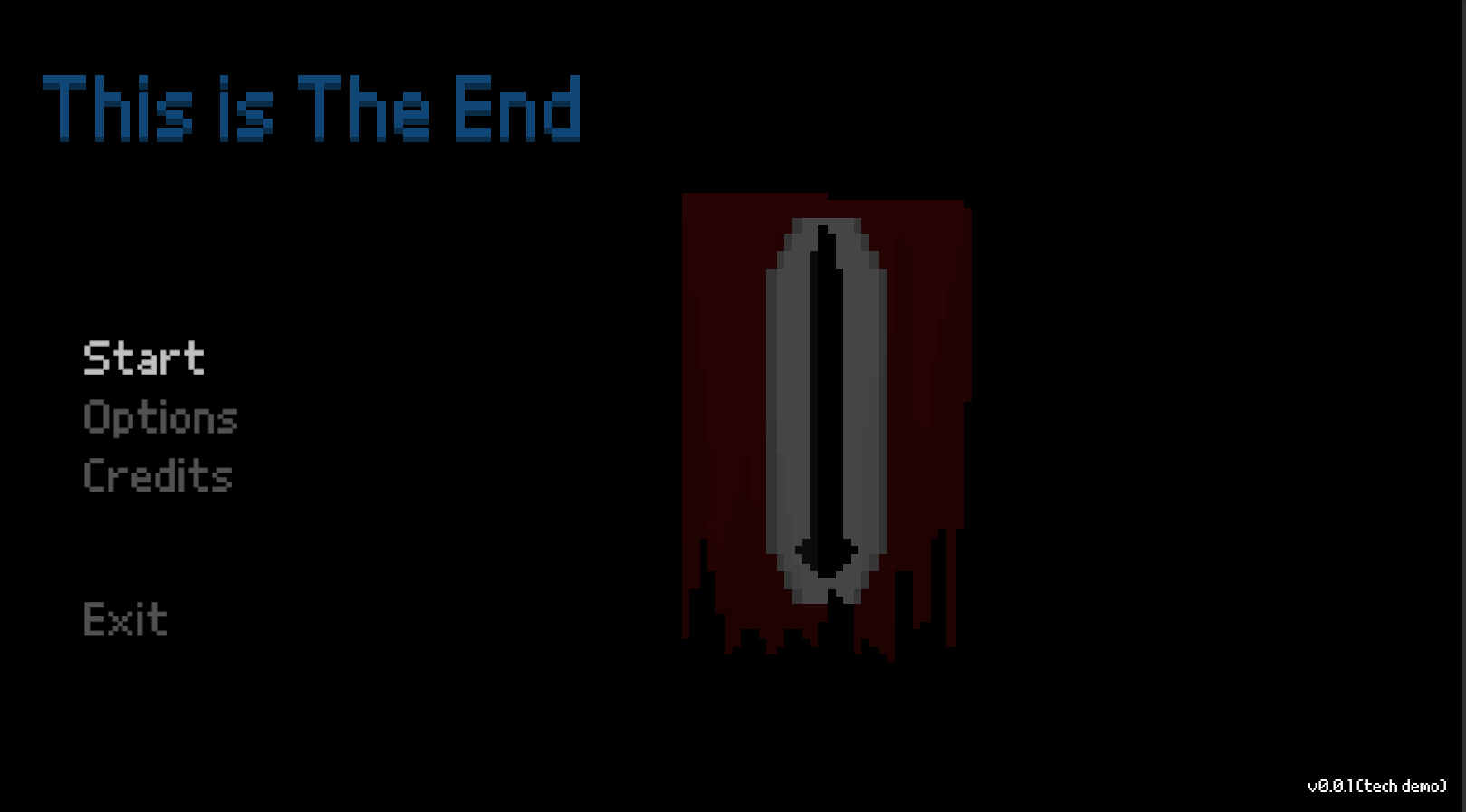 Tried to keep it to bare minimum. The contrast between "This is The End" and "Start" seems unintentionally funny though. Also, I might need that logo for the game. I keep on repeating this, I know.

Anyways, the main screen is there, the end screen (which I presented the last time) is also present - meaning that the game has a legit start and end (well, at least for the part which will be covered by the tech demo). Also, I moved some code around to make sure that there's a separate place and time for loading game resources. So I have a loading screen, really.

I will still have to implement handling of options and displaying credits. Credits will be one of the last things on my list; options will come in sooner, as soon as I figure out what should appear there. Surely I'd need a brightness slider, two sliders for sound and music volume, and possibly something to handle game resolution change?

Having that part of the game ready, I fleshed out some outstanding annoying issues, like making the movement smoother and slower - especially when dealing with diagonal moves:

(first footage is using the old movement speed; second - the new one)

I still believe I should make sure that movement paths are more fluent; possibly I'll have to use some kind of interpolation when calculating the movement - but I need to watch out for characters going through obstacles/walls, obviously.

Additonaly, I started adding some game lore related stuff into the assets. Here are some Empire conscription posters:

And here's one appearing in the game:

My next milestone was about trying out "character speech bubbles" idea - basically I wanted the survivors to comment on different game situations. The goal is to make them more human and relatable - just to make sure that their inevitable death (game will have permadeath) will affect the players more ;)

Here's how it looks so far:

Character commenting that no enemies have been met in X turns:

Well, this is the first time that I am not sure about the priorities.

I need a game website so I might spend time on creating one. Or, I might add myself a Steam page, allowing people to wishlist the game. I heard that it is never too early to start the wishlisting process.

But maybe I'd need that logo first.

Alternatively, there's whole another subject to cover, and these are the sounds. I already did some proof of concept with that and stuff seems to sound great. The problem is that in order to post update on sounds, I'd have to be uploading videos instead of gifs. And in order to do so, I'd have to have a decent... logo of my channel/game? Damn.

Of course there's a bunch of other features that need fleshing out: things like weapon backfire mechanism (which needs more 'live' animations), or the whole character quirks/bounds mechanism (that I haven't mentioned about until now, really).

I guess I will spend the weekend celebrating St. Patrick's day and see what comes into my mind after that :)

I was practicing my pixel art skills again: here's a black mage, made for pixel dailies the other day :)