Finally! I have started implementing mechanics that will make the game closer to Darkest Dungeon vibe; these are, of course, character traits.

Side note: XCOM did introduce traits in the War of The Chosen expansion as well, so this feature is obiously not exclusive to Darkest Dungeon.

(note that trait icons are missing) 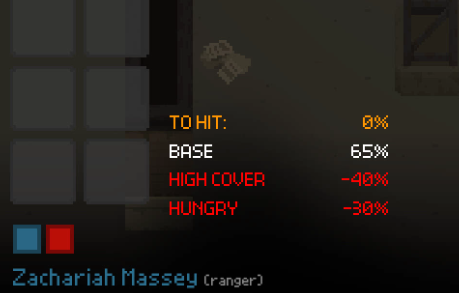 Active traits can activate themselves if certain conditions are met. Characters with "Cowardly" trait have a chance to panic when enemies appear.

It turned out that implementing the panic mechanism was quite a challenge! Panicked character runs in a random direction and then hunkers down. And this happens automatically, meaning that the player cannot control this. What is more, during the panic move, a character might trigger a reaction fire or reveal another enemy pod. All of this made me to redesign the core gameplay/animations loop - but it was worth it.

One might ask how a character acquires their traits? Well, that's a very good question! Some of them will be assigned randomly during character creation; other will appear after some in-game actions or decisions; for example "Hungry" trait will be applied if, obviously, the character will not get their food rations. But that's another story for another time.

For now grab some gifs:

There's still much to do in the traits system. I am planning to add positive traits as well, granting some bonuses for the character (e.g. allowing them to perform an extra action).

I also have some new ideas on how to change the hit points display for characters, but I have to try them out first to see whether it looks good.

Also - I am having a holiday break next week, so the next blog entry will only appear in two weeks.