So it's been two weeks since I've published something, due to having a week off. 1st and 3rd of May are public holidays here in Poland, so I've decided to go on a holiday trip with my family. After all, it is important to live a normal life during that whole game development process, right? Especially if it is still only a side project :)

Anyways, I did manage to work more on character traits system that I decribed in my previous post. One of the new concepts I have tested out is the availability of character actions based on a trait.

Here's an example: there is a "Rush it!" action available, which grants an extra action point to the player character. Initially, this action was exclusive to the Rogue character class. Rogues wield a close-range shotgun, so having the possibility to get closer to the enemy and fire at point-blank range on the same turn was fun.

However, I felt that I might want to expand on this idea. So I've introduced a "Fast" trait, which grants the "Rush it!" action to whoever has this trait. 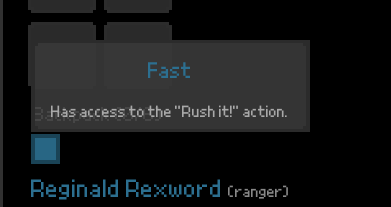 (I know, there's an icon missing in the trait rectangle indicator. In fact I don't have any of the trait icons ready yet.)

It means that even non-rogue characters can have access to that action, which gives the player a lot of more tactical choices. You want to have a ranger (a sniper-type class) performing a move and then firing their weapon at full accuracy? With rangers having the "Fast" trait it is now possible.

(Alternatively, a ranger can reload their weapon even after performing a dash move which normally consumes all action points)

Of course now it means that there can be shotgun-wielding rogues in the game that do not have the "Fast" trait. This kinda broke my initial idea with rogues always having the possibility to rush their way to enemies to kill them from short distance in the same turn. Was that a good tradeoff in the end? I don't know. It might be that after some playtesting I will make sure that the "Fast" trait gets assigned to Rogues a little more often than to other class types.

Now, I had to make sure that this animation is not too long so that it does not interrupt the gameplay too much. I personally hate when I have to wait too long for some animation to finish in games.

Also, I had some nice feedback after putting a trait activation gameplay footage on Reddit. I decided that despite my initial need to present the gameplay rules as clear as possible to the player, I will hide the trigger probabilities for traits in the game (to make the characters more "human", and not following some raw numbers), and make sure that these probabilities are not very high - to make sure that the player actually is surprised when such trait gets triggered.

Finally, I made sure that the traits are assigned randomly to characters, thus making sure that each demo run is different.

Alright, so this part was very exciting for me: I checked the backlog, and there were no more gameplay features that I wanted to be present in the demo - meaning that the demo is now officially feature-complete!

It doesn't mean that the demo is ready - there is still a lot of work ahead of me. It is just that I am not planning to add any new gameplay features to it. I want to focus on providing a vertical slice of the gameplay based on the current features.

From now on I will be focusing on implementing audio (sound and music), and adding more graphics. Kurt (the freelance pixel artist I am working with) is currently creating new character models, and I am planning to make some pixel art myself as well.

As usual, if you'd like to receive more frequent updates about the development and a heads-up about release of the demo, follow me on Twitter at @bryquTheDev. Also, do help me out reaching a bigger audience by telling about "This is The End" anyone who you think could be interested in this.

Anthony A. Jumelles3 years ago

Stoked to see this release! Has a lot of potential to be a cross-platform hit!

Thanks for the good words!