Alright, so here we are! I thought that there wouldn't be enough interesting (at least visually interesting, that is) stuff this week to actually show it to you in a devlog, but luckily that is not the case.

Last week I was still busy with the sound-related stuff. I have the sounds in place for weapon reloads, shooting, explosions, and for the footsteps. Also, most of the UI sounds are there (button clicks, sound representation of traits being triggered, etc.)

I still miss a lot of stuff, like character grunting sounds and something for bodies falling down.

Anyway, I had do to some non-sound related stuff as well to make sure that I don't go crazy.

So, I've added a healing animation. Characters use adrenaline shots to heal themselves during combat. 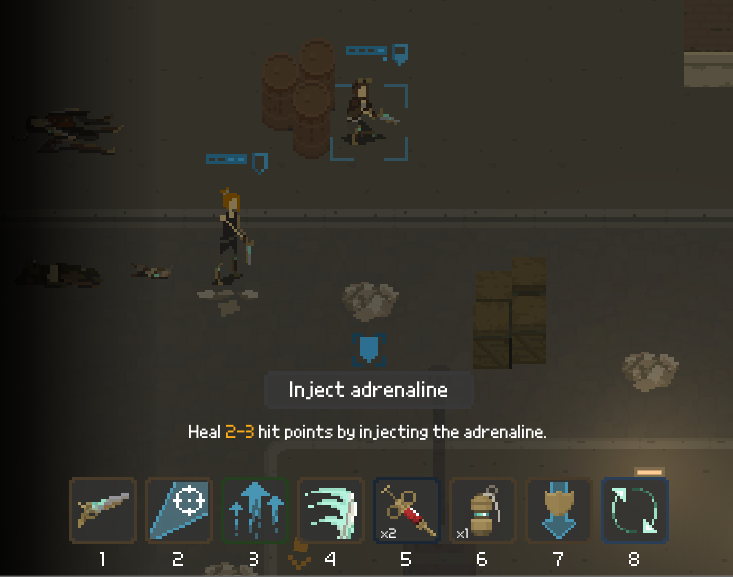 The tricky thing is that a character can also perform the healing on another character, standing next to them. In order for this to work correctly, I should have five different "heal other" animations to cover all the possible directions (up, down, to the side, and two diagonal ones).

Speaking of different directions of animations, I really believe that the game would benefit from having different move and shoot animations as well. Right now the characters are always running to the side, even if their movement direction is different:

Another tweak I did was changing the character trait checking animation. Previously there was an animation being played every time when a trait needed to be checked for effect. Even if the character resisted the effect, the player had to see the animation. I made sure that the animation is as short as possible, but I still felt that it was interrupting the gameplay. So right now the animation is only displayed if the trait actually gets activated - otherwise, nothing happens.

Old behaviour (at the top) vs the new one (bottom).

As with any other change, I will playtest it and see whether it feels right.

I actually see that not focusing solely on audio works good for me and prevents me from burning out - so I will surely split my free time between adding more sound and few more visuals. Also, I am approaching my first year anniversary with development of "This is The End" - I still can't believe that I've already spent that much time on it!