Alright, first here's some follow-up information on the "boost" action design that I described in the previous entry: It now basically allows the player to perform an infinite number of shots in a turn, even if the weapon core becomes overheated.

Firing an overheated weapon still of course carries the risk of taking damage from weapon core malfunction, so performing too many shots without reloading the weapon will still end up in the character killing themselves.

Also, because of this change I have slightly altered the "boost" action - it no longer reloads the weapon at the beginning, as the player is able to use the action even if the weapon is overheated. 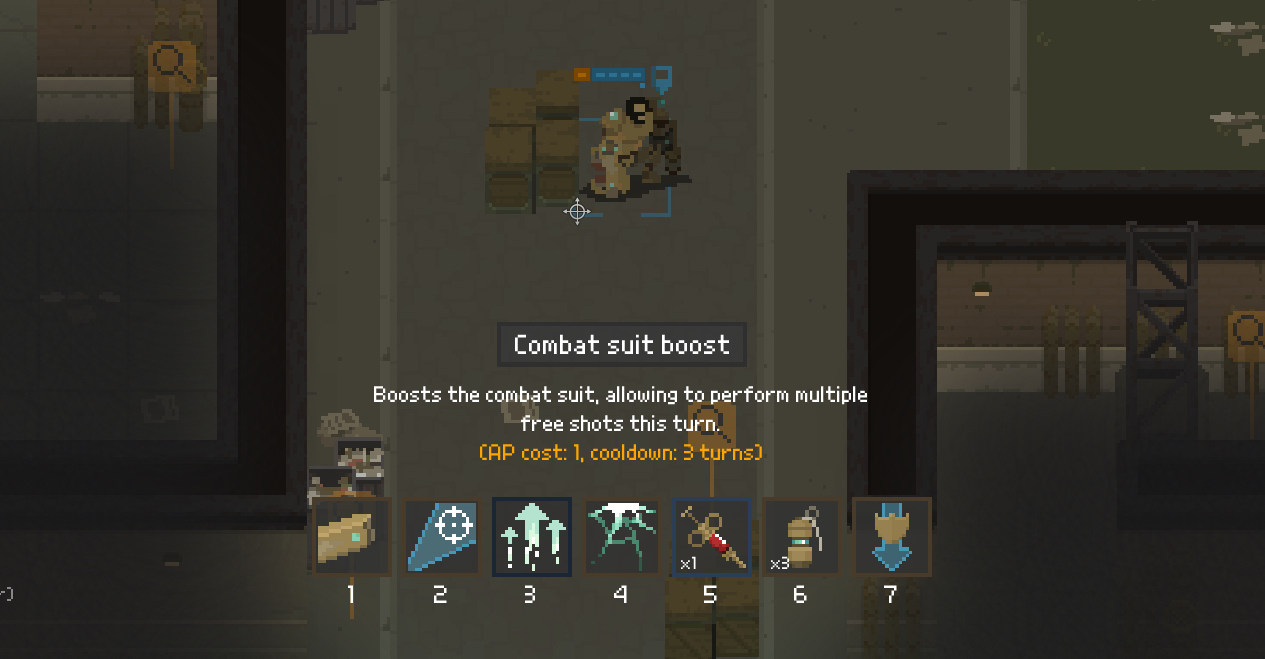 I actually find it amusing when it comes to adjusting the game lore to fit game mechanics. Initially my gameplay idea was that the soldier should not be able to fire an overheated weapon. Lore-wise, I was ready to justify it that the internal safety systems of the combat suit don't allow for such action, as it might cause major damage (probably an explosion of a weapon core on a large scale), including collateral damage.

Later on, when I decided that it will be possible for the soldiers to fire overheated guns, all the lore ideas from above have been scrapped. So now performing such action might result in damage, but there are no safety systems in place - designers of combat suits apparently knew that in some cases it is worth risking one's life for the sake of killing that last enemy instantly, without the need of reload.

This ability to shape the lore in any way I like really is something. It's like creating a new world. It's super fun and addicting!

Alright, so much for the combat boost action I guess. My next plans were to investigate new camera movement library, but I postponed it for now. The current approach is good enough, and I need to finish the rest of the tech demo first.

The good news is that there are no major code changes required. The scope is closed, all the game screens are present, and the game feels like a game - with a menu, settings, the ability to play the demo mission, ending screen and thank you page, and with ability to replay the mission.

All the sounds and music are present as well.

Only some graphics are missing, so I focused on these. Basically the characters still need some diagonal movement/shooting animations. I started working on adding such shoot animations for the rogue.

Here's how it looked like before, when only the "side" animation was present. The first one looks especially vivid:

Here are WIP version of some of the new ones:

That 2nd death animation should still be tweaked (there should be separate death animation for falling in different directions, but I am not planning to include them in the demo; well, I might add them if there is enough time but they're not critical for now).

Still a number of animations is missing, so I will focus on creating them. I will do a lot of playtesting as well, so some balance tuning and bugfixes will be happening. Can I therefore say that the demo is in a polish phase? I guess yes, kind of.

Also, there's still the game name change that will be happening. I need to have a new game logo ready first though. Then there's some Steam stuff that I want to take care of, and possibly setting up some kind of player feedback mechanism as well - but that is not very critical at the moment.